How to Make Character Emotions More Expressive in Animation

How to convey emotion in animation? Why emotion is important? What are the 7 core emotions? How to use facial expressions and body gestures to make characters more expressive?

Creating natural and credible emotions is necessary to create believable animation. Well animated emotion can add a great deal of drama to the scene and create an interest in the people watching the animated film.

Emotions are the key to demonstrate the cartoon character’s personality. It is important to convey that our character is unique and he has a history and attitude of his own. 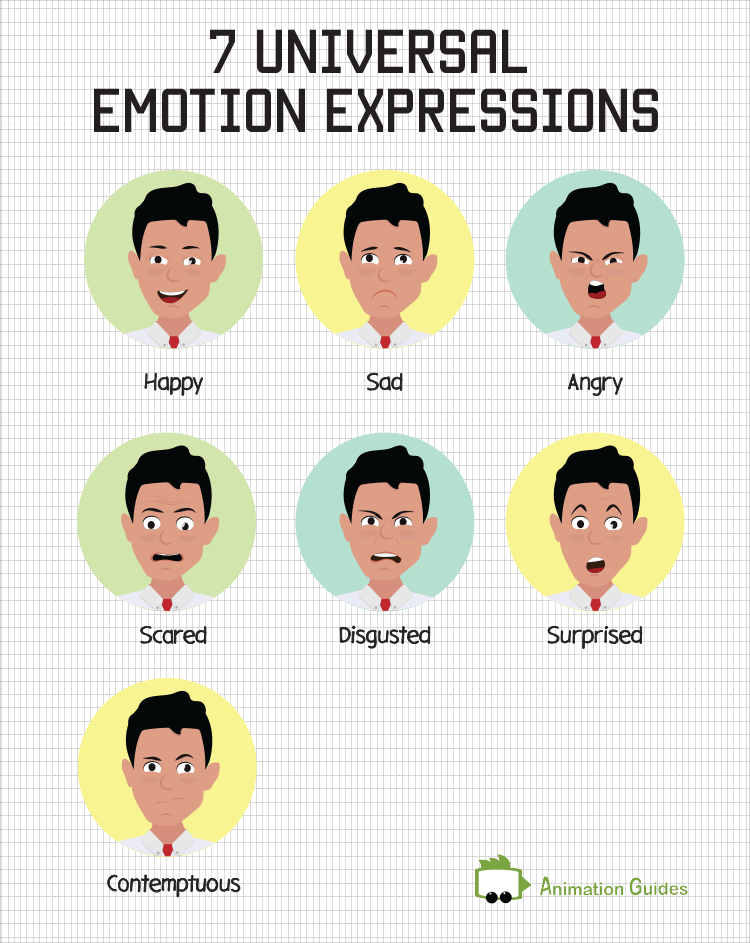 One of the ways to communicate emotion in animation is by making sure we are creating a thinking character. It is important to pass on the idea that the thoughts of the animated character urge his farther actions and movements. The anticipation principle of classical cartoon animation can be used to create believable and emotional animation in 2D as well as in a 3D environment.

It is important to create eye and head movement preparations before creating the body movement itself. The eyes should move first since they are responsible for the upcoming movement of the body and are the window to character’s soul, thoughts and emotions. Next is the head movement. If this principle of animation is not carried out and the body moves before the head and the eyes, the action will not look like it was initiated by the character but by some other force and is opposed to the character’s initial thoughts. Creating a thinking character is the first step to giving life to the personage.

Facial expressions are the most effective way to convey specific emotions. Our face contains 43 muscles and can actually make more than 10,000 expressions. The parts of the face which are mainly involved in the expression of emotions are eyes, eyebrows, eyelids, and mouth.

The size and shape of pupils

Studies show pupils size is affected by our emotion. There are actually researches that examine the change in pupil diameter to be a signal for an accurate emotion recognition by human-computer interaction systems. That makes pupils an amazing tool for animators to express or emphasize the emotion of their characters. The change in the size of the character’s pupils helps express many different emotions. They change in consonance with light, pain, focus, touch and of course feelings.

Enlarged pupils communicate excitement and engagement. Smaller pupils, on the other hand, will help show the character is experiencing a negative emotion or being emotionally distanced from the situation. 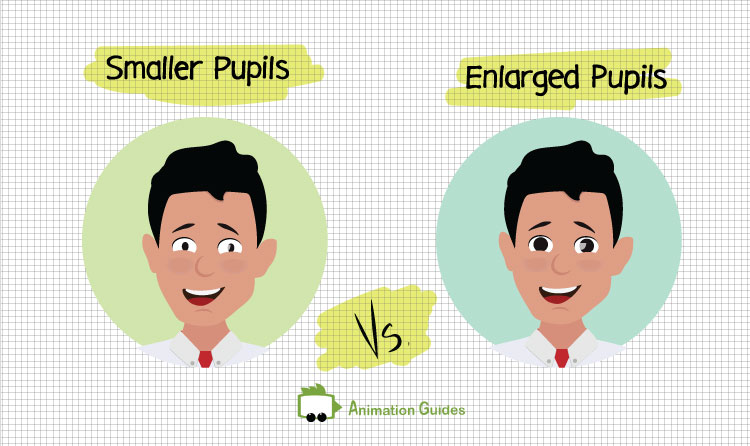 We can also change the shape of the pupils during our animation. Giving the pupils slightly elliptic shapes can help with showing where the character is looking. That can turn especially useful for characters which do not have eyelids or eyeballs.

The direction the character is looking at can completely redefine the communicated emotion. The eyes can complete the emotion translated by our body gestures or actually do an opposite and by that show the contradiction between the emotional and physical state of the character. 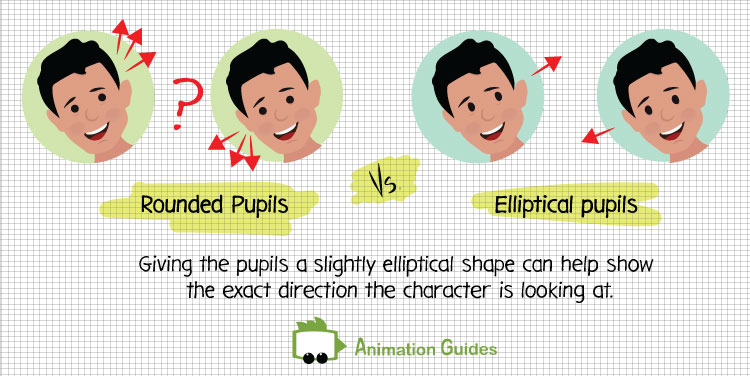 Pupils are usually positioned in a way that they touch the eyelids. Surrounding the pupils with white all around is a way to convey a very strong emotion such as being shocked, scared, surprised or maybe going crazy. 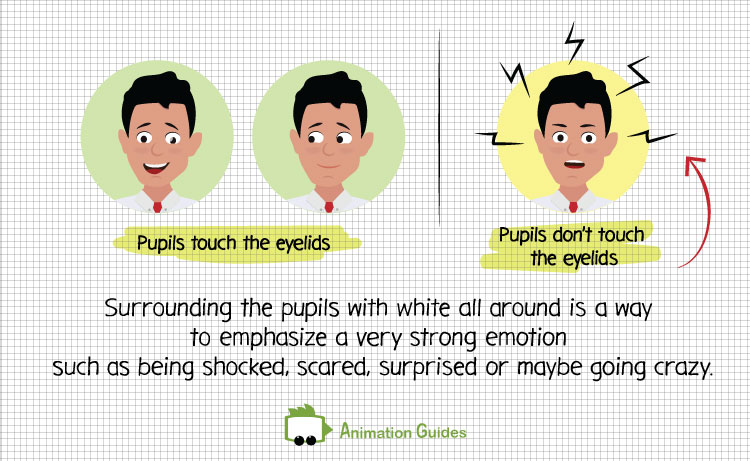 Eyelids are used for blinking. The way we blink can communicate different emotions. The speed we open and close our eyes will change depending on if we are currently waking up, being sleepy, feeling in love, having trouble understanding something or actually trying to get the attention of someone.

Eyebrows also play an important role in communication and emotional expression. Eyebrows can express anger, sadness, fear and a wide range of other emotions. 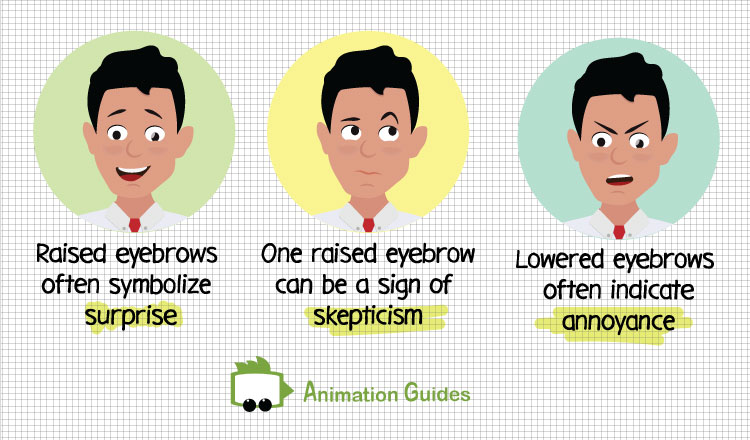 Raised eyebrows often symbolize surprise and astonishment as well as uncertainty and confusion.

If only one eyebrow is raised it usually a sign of skepticism.

Eyebrows up and down movement happen when we notice someone or something.

Mouth area has a highly important role in communicating emotion. When it comes to core emotions, it is especially imperative in expressing happiness and disgust. (Eye area has more weight in expressing anger, fear, sadness, and surprise). 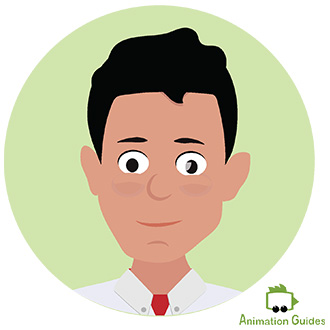 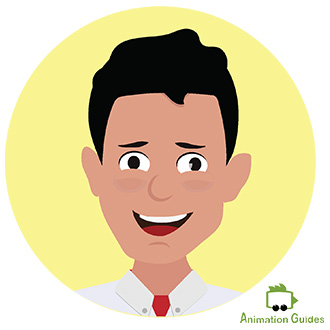 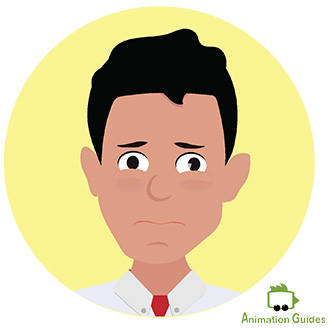 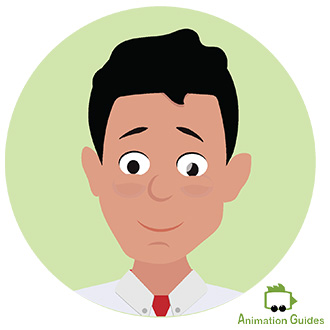 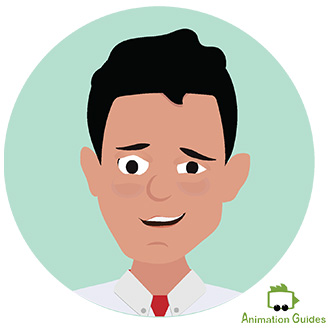 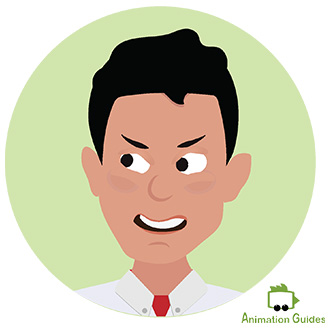 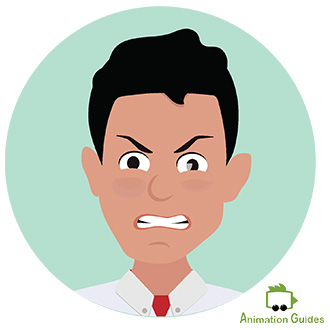 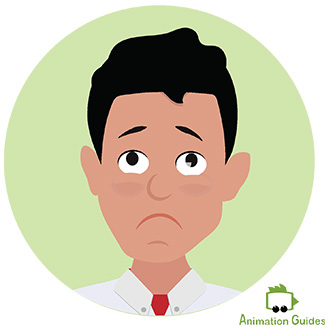 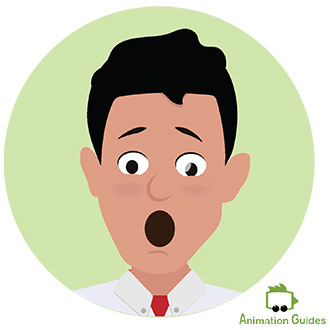 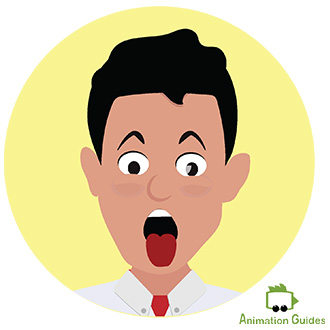 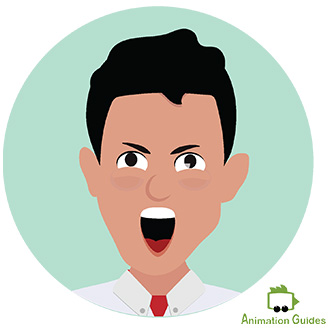 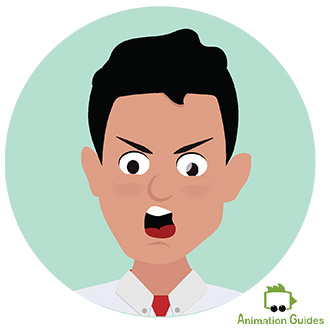 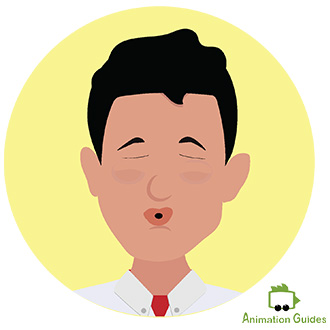 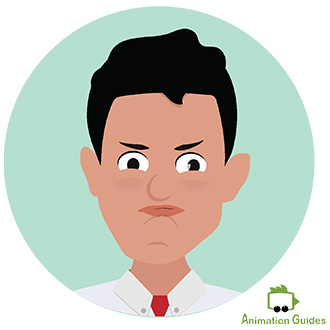 Emotion lies not only in the facial expression of the cartoon character but also in the body language and movement. Hands, arms, shoulders, legs, torso and head gestures can help reveal the emotional state of our character. Velocity, acceleration, and jerk can also serve as indicators for what our character may be feeling.

Knowing the right gestures to communicate certain emotions can fasten the process of character animation.

Head nods are known to be signs of agreement. That is true for slow nodes. But changing the intensity and the speed of the nod may actually make it mean different things. Animating a character with fast nodes will make the character look inpatient. Small nodes every now and then maybe signs of bonding.

Head tilt to one of the sides may signify the character is feeling comfortable in the situation or trying to think about something from a different angle.

Pushing character’s head forward is often a way to emphasize he is angry and ready to attack. But it may also be a sign of interest.

If we want to show that our character is afraid and uncomfortable in the situation we can retreat his head backward.

It is important to make sure that all body gestures together with face expressions work together to communicate our message. Take the head tilt up for example. Just this gesture on its own can’t tell us anything about the emotional state of the character.

Tilting the head up while looking down can express overconfidence.

But tilting the head up while looking up expresses a completely different emotion. That will usually stand for a character trying to solve a problem or maybe daydreaming. 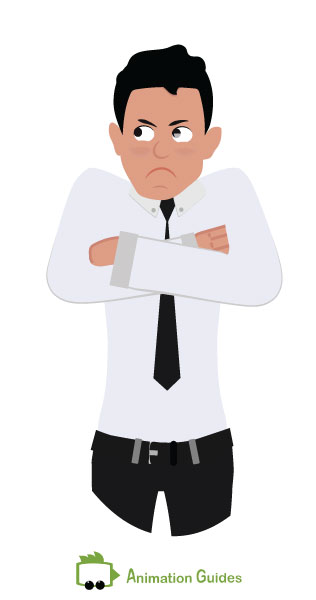 Lifting the shoulders is a way of the body to hide the head in order to protect it.

Shoulder down is a way to express sadness.

Rubbing the hands fast communicates excitement. Slow hand rubbing is a sign of character having something to gain. 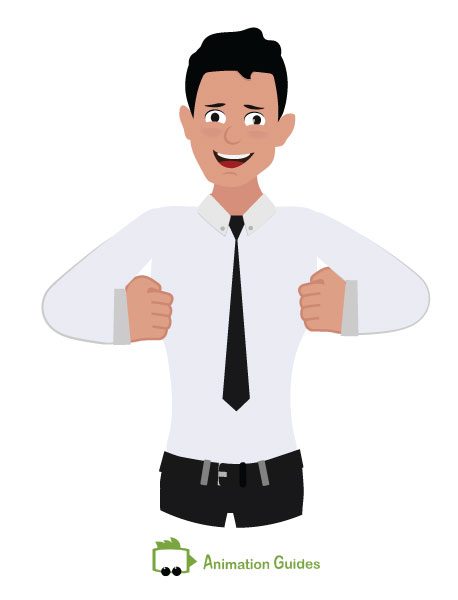 Bringing the chest forward can express confidence, power and often even aggression.

Hiding the chest will convey low self-esteem and often even fear.

It is important to make sure the gestures we make follow a clear line of action. That will help create more expressive poses. For the animation to feel more dynamic it is best to build our poses on curved lines of action as opposed to straight lines which usually feel stiffer.

A great example of how the line of action on its own can express emotion is a work of Chech photographer Vlad Artazov. He has played with the shapes of simple nails and made them tell a real story just by curving them and staging.

Making sure the silhouette of our character is clear is another way to communicate more emotion. It is easy to test the silhouette by turning our pose into a shadow ( just fill it with black color)  and seeing if the body language of our pose is still recognizable. 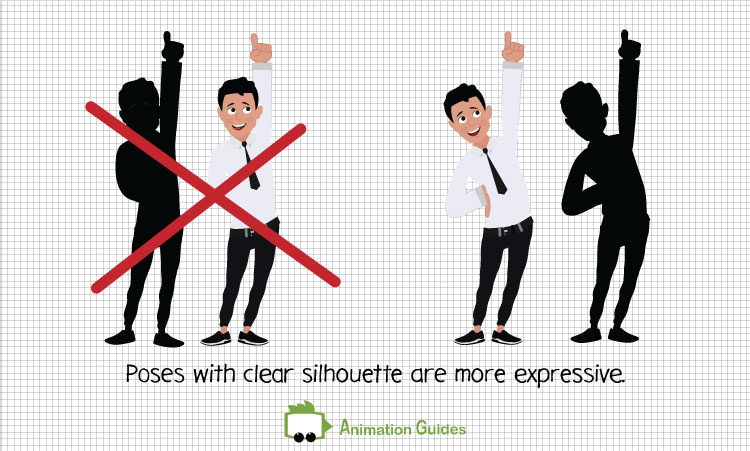 Emotions can also dictate the time that is taking for every action to take place. A happy character will perform every movement and action faster than a sad personage.

Changing the type of shot as well as the position and size of the character in the scene affects how the audience perceives him. That is called staging, and it is one of the 12 main animation principles.

It makes a difference whether the character is placed in top, bottom or middle of the scene. Positioning the character in the bottom can make him feel powerless, placing in the top can be translated as a sign of authority.

It is important to understand that most of the communication in the world we live in is not verbal communication. Being able to display the inner emotional state of our characters is our primary goal as animators. Remember that the scene itself, as well as almost every part of the body can be used to communicate emotion.

Are there other features that can help us create believable characters? Take a moment and tell us in a comment below. 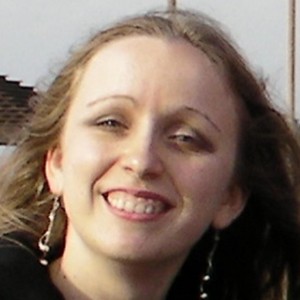 Hey! I'm a CG artist, designer and illustrator. I love to explore different creative forms, media types and artistic styles. Feel free to write me with your ideas, suggestions or requests.

Please log in again. The login page will open in a new tab. After logging in you can close it and return to this page.